StarCraft II: Our Thoughts So Far

LOS ANGELES, CA — A man was found bleary-eyed and stumbling about on Olympic Boulevard today, obstructing traffic and crying “Kekekeke!” at passersby. LAPD officers responded to the scene, but released the man — identified as Eric Neigher — on his own recognizance. A spokesman for the department simply stated: “Frickin’ StarCraft II.”

When asked what drove him to his actions, Neigher responded with a prepared statement: “I’m glad you asked, and hey, nice skirt. What I want people to know is that StarCraft II: Wings of Liberty is pretty much exactly the same as the original StarCraft. It’s got better graphics, sure. And it features a lot of new storyline in the campaign and a lot of yakking in-between missions — but when you get right down to it, not very much has changed.”

Neigher added: “The Protoss are still quality-over-quantity, although most of the single-player missions involving the Protoss take this to an extreme; you really just play one (or a few) Protoss deep behind enemy lines, with no base building or anything like that. The Zerg are still all about ‘human’ wave tactics, and appear in the single-player campaign as an ever-present antagonist. As for the Terrans, they occupy an interesting middle ground: Depending on whether you spend resources on upgrading unit quality or production capacity, Terrans can scale more toward the Zerg style or more toward the Protoss style. Definitely the most versatile race to play.” 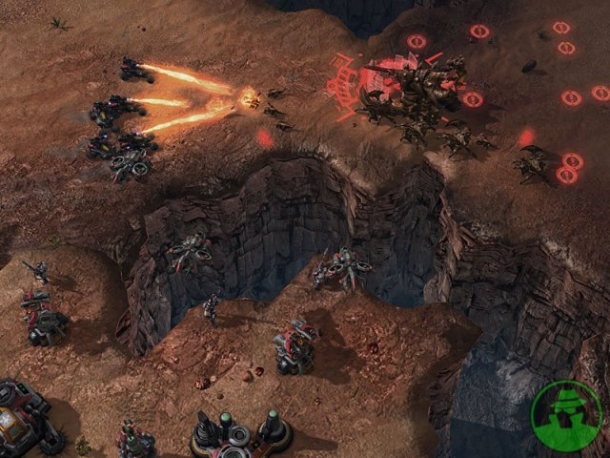 Apparently unwilling to directly address why, exactly, he had been obstructing traffic, Neigher attempted to clarify: “It’s the story that keeps the single-player missions exciting, rather than the missions themselves. While Blizzard’s included an achievement system of sorts to encourage you to replay missions, the design is straightforward enough that skilled players can get most of the achievements on the first shot. The mission design — while it wins major points for interpolating the storyline into the gameplay — is tied down by SC2’s extremely traditional real-time strategy approach. Unlike, say, Company of Heroes (where missions are designed to be free-floating, and the key areas of the battlefield can shift as different control points are captured and ceded), SC2 requires you to take one of a few approaches, as your base is always tied to a particular area — either because that’s where the resources are, or because you literally have to build your base within a certain grid. Also, nice blouse.”

After this fusillade of verbiage, Neigher abruptly left the scene and wandered off in a westerly direction. One can only speculate as to the number of hours the poor man spent playing StarCraft II… and marvel at the extremely addictive nature of any game that could spur this kind of reaction and this sort of passionate description this rapidly.

Tagged as : Far, game, II, Our, So, StarCraft, Thoughts